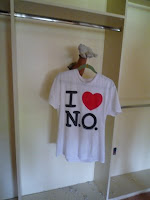 Each of you has been issued a t-shirt. You have to wear everyday it while you are working here for the next week. This t-shirt will give you an instant reputation and a free pass to many things. This t-shirt has been worn by many, many groups and individuals before you. The people here in New Orleans know and recognize the t-shirt and they know you are here to help. Wearing that t-shirt you can walk into a restaurant, use the bathroom and leave, and noone will question you. That t-shirt will allow you to walk down some of the most dangerous neighborhoods and people will be kind to you. That t-shirt transforms you into a hero into the eyes of the people here. They will know you are here to serve and pray with them.

This was one of the opening speeches I heard last week when I went with my son's youth mission trip through Community Christian Church in conjunction with EFCA in New Orleans. By the end of the week, I knew that he was serious. The people were so friendly to us, they were willing to talk and pray with us. When we put on those t-shirts and went out as teams, we were no longer individuals, we represented something bigger. It would have been hard for any one of us to make a lasting impact, but as a team unified by a t-shirt we did make an impact. 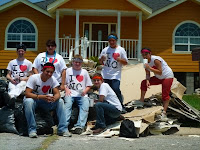 We were transformed internally when we put on the t-shirts also. While wearing the t-shirts we forgot what was important to us or what we wanted to do and focused on the needs of the group and project. We even slept on floors and showered with frogs. Groups worked on roofs in New Orleans in summer! (95 degrees and humid)

At the end of the week they challenged us to not let our work stop when we took off the t-shirt. They dared us to live everyday as if we were wearing that t-shirt.

And that really made me wonder how far this t-shirt idea could go. A logo t-shirt transforms a group of people from a crowded hike into a walk-a-thon curing cancer or a group of kids kicking each other into a soccer game. People bonding together around a cause, idea, goal or team get transformed when they have a badge they can wear that tells others what they believe in or what they are doing.

However this transformation is not because the t-shirts are magic. It is because they have a symbol to rally behind. YMCAs are great at promotions like giving out t-shirts, water bottles, pencils, etc. And people seem to like wearing our "gear." But that t-shirt does not transform the person. The transformation comes only if that t-shirt is tied to an action, a cause, a team or somehow letting that be a part of your organization. Giving the t-shirt is not as important as inviting them into your team.

Transferring this to the web may not be as hard as you think. I think that adding the causes application or becoming a fan of an org on Facebook can be similar to wearing a t-shirt. You have some cool "gear" to display on your profile. But just like that promotional t-shirt, just getting a fan isnt enough, you have to get them engaged and invite them into your team. DONT give them the t-shirt to just wear as an advertisement, let them crave the t-shirt because they are so involved in your team.
On a side note, I must say that anyone that discounts the importance of teens in making a difference should go with us next year. These teens worked harder, sacrificied more and prayed in a way that I could never imagine. Teens are not the future changemakers, they are todays changemakers.

I am trying to figure out an "online t-shirt" that people can earn and wear online to work on behalf of the YMCA or to be our spokesperson. hmmmm......
Posted by heyetech at 1:03 PM 2 comments:

One of the biggest challenges that a YMCA may have is that each individual staff person holds the keys to our success (or challenges).
For example, our camp staff have the opportunity to impact a kid's life possibly forever. The relationship between camper and counselor could form an impression that lasts a lifetime. We can either win over a supporter or make them run away. As if it isnt enough to worry about the experience the camper has, we also have to help the staff have a good experience so that they come back also.
So here is the opening set of sketches that I did for the YMCA of Metro Day Camp staff. The whole idea is that when you need to be purposeful separating your professional and personal behavior. Also when you are representating the brand you have to be a role model (online & offline). A secondary thought that came out was "Camp memories may last a lifetime, but the internet remembers everything forever, so act accordingly."
Posted by heyetech at 9:59 AM No comments:

About this place and me

I have a strong passion for nonprofit technology and a wide range of experiences. However, my connection with the NPTech community is a key element to my success. I am a Solutions Consultant with NetSuite.org and have been in nonprofit tech 20+ years. The views in this blog are my own. My previous roles include The Cara Program as Manager of Technology, the YMCA of Metro Chicago as Digital Content Services Manager and the YMCA of the USA as a Technology Consultant.